Digital signage is ever-present in airports – from airport counters to boarding areas to many of the food and specialty shops that line the terminals. Airport digital signage networks are also equipped to broadcast important safety information in the event of an emergency. Train and subway stations also present a significant growth potential for digital signage.  New way-finding kiosks are making their way into these stations, making it easier for people to find the most direct (and quickest) way to get from point A to point B. And beyond these way-finding capabilities, digital signage is being used at a growing number of stations to display important information like service delays and estimated arrival times.

How Do RACVISION Video Walls and Digital Signage Work in Transport Hubs?

You should expect the unexpected when it comes to travelling and by using Digital Signage transport hubs can update their screens instantly. Timetables and any form of live data can easily be published to screens, kiosks and video walls in places such as train stations, bus stations, airports and transport depots. By keeping waiting passengers informed with real time information you can help suppress those feelings of annoyance. Real-time updates can easily reach the right audience at the proper time. Digital signage solutions provide one of the best ways to let passengers know about delays or schedule change. Making alternate plans or finding another route is easier when passengers can get updates in real-time. Real-time updates make a major difference in effective plans.

RACVISION digital signage solutions offer visual performance, wide viewing angles, the reliability to operate 24 hours a day, and can be updated in real time to communicate important changes. Display technologies compatible with emergency broadcast systems can be set up to deliver urgent messages or information to specific areas or an entire venue.

The first thing for anyone visiting an airport or railway station needs to see is clear signage of where to go. A large, crowded transportation hub can be overwhelming for anxious travelers. Digital signage routing helps passengers navigate through busy terminals and unknown facilities by guiding them to where they need to be. Vibrant, ultra-high resolution screens are easy to see and provide clear and vivid signage that reduces passenger stress and the bottlenecks that cause confusion in busy areas. Way finding digital signage typically is stagnant and directs travellers e.g. arrivals, baggage claims, taxis and customer services. Airport digital signage can also include information on popular local destinations, restaurants, shops and hotels. RACVISION touch kiosk, supporting way-finding strategies to guide travelers through unfamiliar environments while communicating across languages and cultures. 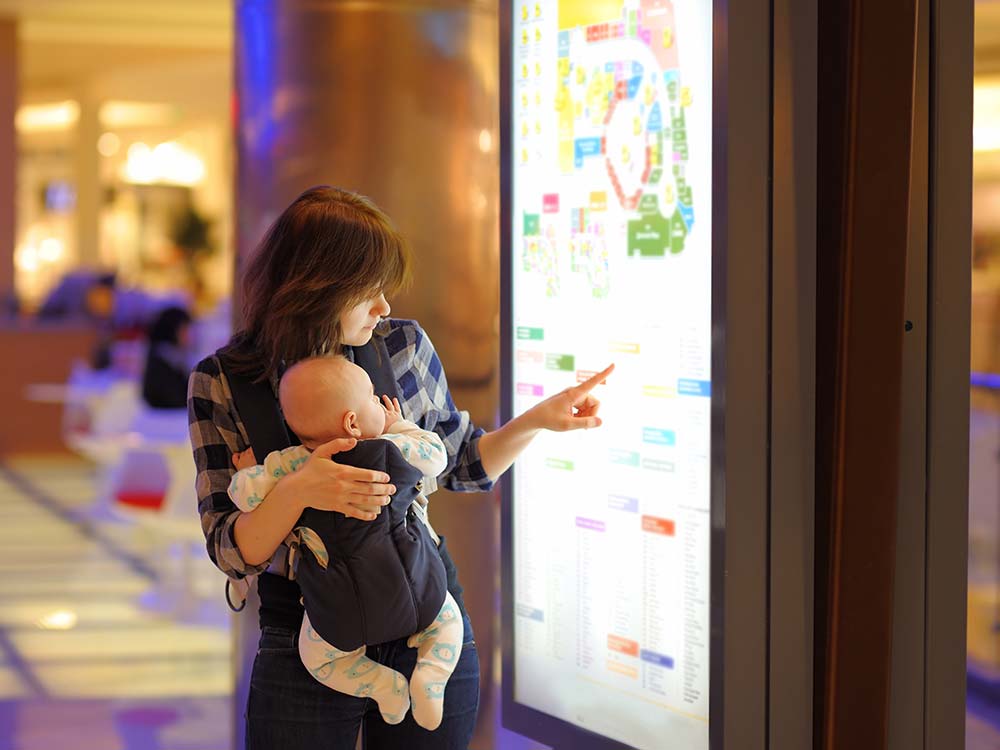 Irrespective of the kind of transportation hub, digital signage is a super easy and impactful way to get your messages across to consumers and employees. Many businesses will take advantage of people waiting in line usually wanting to kill time while they’re waiting. Companies that want to reach customers in new locations will have a good chance of attracting attention to their content. As well as standard or ad-hoc alerts, you can promote your key brand messaging. Plus high quality content, such as HD videos and beautiful images which engage and impress. You can enhance customer and employee loyalty no end in this way.

It might seem obvious to point out that a Digital Signage display is primarily used as a selling tool. Travellers love a few impulse buys. But, they often may not have a lot of time to browse. So, there’s limited time to influence purchasing decisions. Many businesses will take advantage of people waiting in line usually wanting to kill time while they’re waiting. Companies that want to reach customers in new locations will have a good chance of attracting attention to their content. Airports, train stations and other terminals remain a great place to grab consumers’ attention. Apart from mounting screens in store windows and in stores, there are other places where can be used for proximity marketing. Besides coffee shops, restaurants and bars, explore other spaces. Such as pillars which next to or above stairs and escalators. Even beside and inside the toilets.  And you don’t need huge screens or video walls in each place to make a big impact in terms of generating purchases. Opportunities are everywhere. It’s more about right place and right 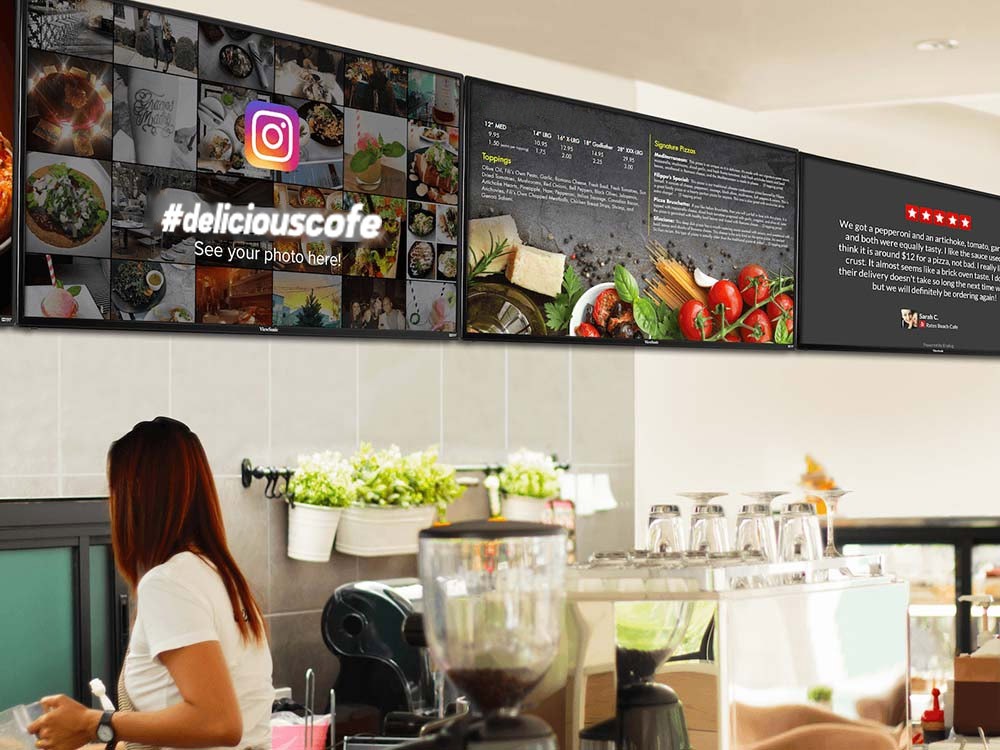 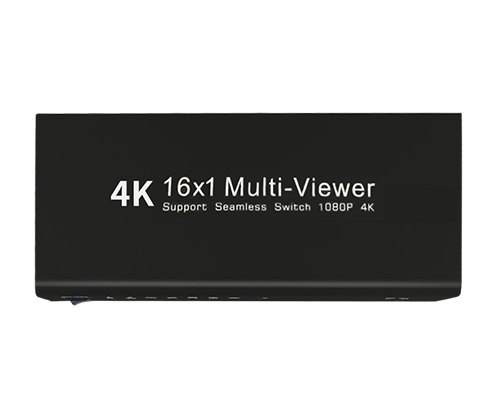 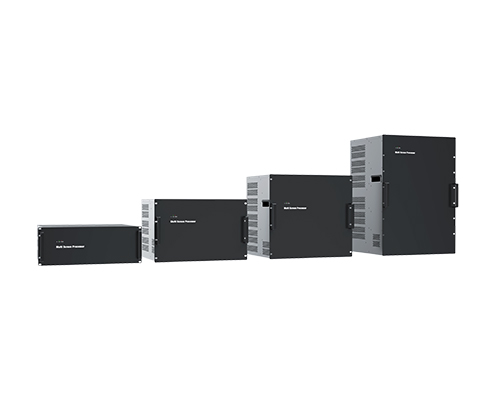 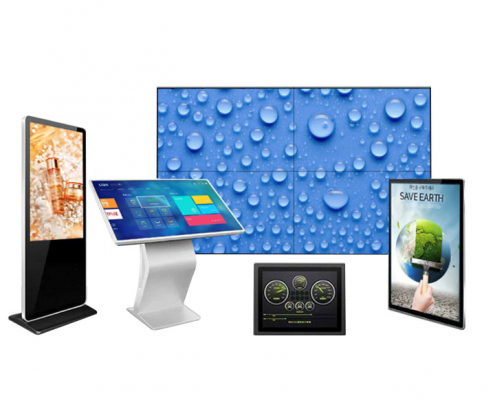 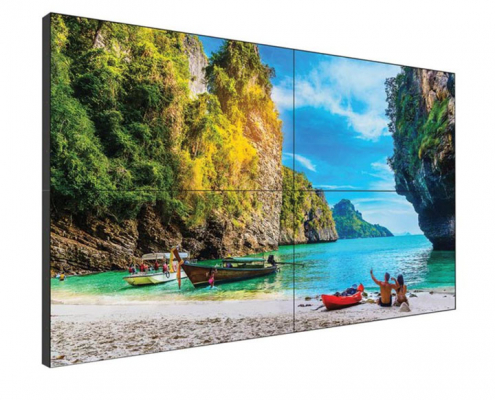