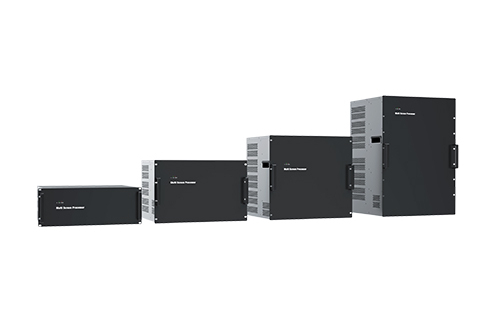 Hardware-based Video Wall Processors are electronic devices built for specific purpose. They usually are built on array of video processing chipsets and do not have an operating system. The advantage of using a hardware video wall controller is high performance and reliability. RACVISION Video Wall Processor is typical hardware chip based device, perfect for broadcasting, command center, control room and other areas which are important as well as centralized control.

Command centers are called for to run all day and all night. Downtime, system crashes or power failures can all have an unfavorable influence on performance and effectiveness.

Hardware based Video Wall Processor are built on an equipment platform, FPGA CPU could provide quick as well as trustworthy performance. Consequently it could prevent the system collisions, viruses, or computer hacks. With redundant power supply, could make command center accomplish the procedure 24/7.

The Video Wall Processor software program supports the message scrolling feature to present relevant messages or announcements as it appears. And also it supports OSD (On Screen Display), permits differentiate as well as regulate the video wall display unit with a computer mouse as well as keyboard attached. For that reason, customers can regulate directly as well as right away on the video clip wall surface displays to swiftly access the display or source.

Command center need to be a protected environment, the information readily available as well as the individuals with authority to manage the video display screen should also be controlled. RACVISION Video Wall Processor sustains the development of several users, various customers can be provided various operation authorizations and also control setups.

Want to join the discussion?
Feel free to contribute!

What Are The Top 5 Trends of Digital Signage in the near future?

What Do You Know About Interactive Sliding Screen?
Scroll to top